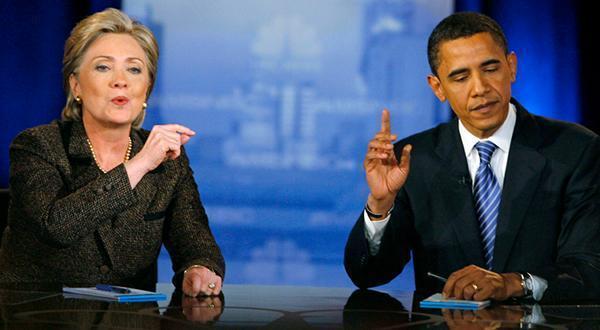 I came across this article in an obscure newspaper that... well... just fell out of the sky...

October 17, 2007 -- WASHINGTON - Hillary Rodham Clinton has jumped to an astounding 106-point lead over Barack Obama, topping her main rival among every major slice of the electorate and widening a dominating advantage she has held all summer. What is even more amazing is the fact that her lead actually now appears to be greater than 100% of the electorate. How can this be?

Clinton not only got support from an overwhelming majority for the first time in any national survey about the Democratic presidential field, but she received virtually unanimous support from every individual polled... here on the planet. And therein lies the secret of how Mrs. Clinton has topped the mystical 100-point mark. For the first time the poll included space aliens, and as expected most went for Mrs. Clinton. She is backed by a whopping 126 percent in the latest Daily Bugle/Planet Xorg News poll.

Obama follows far behind, with 20 percent, and John Edwards has 13 percent. What is also surprising is the lack of support for Obama, who himself is a space alien. Although John Edwards hair is said to be of extra-terrestrial origin, he was not able to put up any significant numbers.

The contours of the survey are striking, even considering Clinton's previous edge. The fact that resident aliens and illegal aliens support Clinton is not surprising, given her pandering to the welfare class and stance on big government giveaways. But to have jumped ahead of Obama with the space alien vote is a testament to Mrs. Clinton's non-human qualities.

One of the poll participants, a Mr. Beyqrdbv from the Planet Xorg said: "Xpht mzl shnobet Clinton." We could not translate the response and were unable to supply video footage because our camera melted. But everyone left alive after the blast agreed that the space aliens really do like Clinton.

"I think it's pretty well done, don't you? All over but the voting," said Rep. Tom Petri (D-Wis.), when asked about the poll. That remains to be seen. Apparently we hold elections in this country to find out what the people really want. Although the polls make for good news copy, they really don't mean a thing!

Dick's Joke of the Day